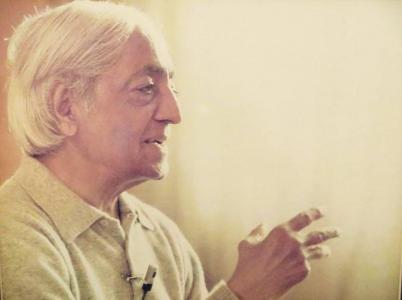 The future is Now

This great saying from J.Krishnamurti was the actual reason I did some radical changes to my life from time-to-time. It is not easy to be aware of this false perception of "phsycological time".

The first time I heard Krishnamurti talk he was talking about taking ourselves seriously and that one should observe the way his/her mind moves.

He actually persuade me into talking action and responsibility for myself. I caught my mind jumping endlessly from one thought to another. I often found that because of that I was unable to focus at work, at home or sometimes even when somebody was taking directly to me.

And it was then I realised I was exhausting my energy in mind chatter actually. The worst and best thing I found out was that for years I was caught up in a thought-pattern of having bad thoughts which lead my mind into creating instant scenarios. At this very  instance I was living in a parallel reality where everything was going from bad to worst and my heart was beating faster and sometimes my blood pressure was rising. That was scary and amazing at the same time!

In a way my own mind, through scenario-processing, was triggering very high emotional stimulation because in this story making process I was getting hurt or somebody dear to me was getting hurt, usually physicaly, I was having the worst fights with people which by the way sometimes lead me to anger outbursts! Man, these were the hardest and most tiresome of all events.

Once after a short road-rage incident with a total stranger I was lucky enough to get away without getting hurt. On my way home I had the car window open and just repeating the phrases : "...my mind wants me dead, my EGO wants me dead..."

After all these years of living in my head I was having the worst fight in years and without even thinking or analysing I had made the best observation about myself! "...my mind wants me dead, my EGO wants me dead...!"

From then on, it was getting easier to catch my mind tripping or getting carried away. It was some progress at last.

I remember that as 32-year old man I was struggling with nikotin addiction. In 6 months time I had tried quite a few methods to quit smoking failing misserably each time. Having no more methods to test, an embarassing cough or any self-esteem to quit smoking I remembered, once again, that I could try observing my addiction seriously and closely.

Yes, I wasn't quiting for the time but self-observation showed me  a couple of interesting behavioural patterns let's say: one, I was always "enjoying" the first sip of smoke going into my system and two, I was not enjoying particularly the rest of the cigarette.

After a few times watching myserlf going through the exact same physical and phsycological pattern I finally SAW MY CHAINS!
I could totaly realise the unbearable submission of my freedom!

And guess what...I quit. It was over. With no effort but some side-effects naturally.

It wasn't a long preparation or my determination that lead me to quit. No.It was the momentary realisation of my status both physical and phsycological that had the outmost impact on my decision-making.

It was a conscious decision based on self-observation. It wasn't the systematic evaluation of pros-cons at the specific moment. It really felt like I turned a full-body mirror to myself for an instant and I didn't like what I saw.

The future was building up with every consious "micro-decision".

So, I knew what to do the next moment and a thousand moments from then on...


PS1: If you got down here then I want you to know that in no way I'm claiming any personal enlightment. I'm not better or worst than any of you out there. I just had a couple of glimpses of the awesomeness of life while being aware of the moment and felt grateful enough to share it.

PS2: Actually all the moments while writing down this article were awesome and fun.

PS3: NOW, that I think about it ... I get such moments sometimes when I really observe my daughter or when we (wife and daugher) are having a happy and meaningfull moment

Anyway thanks for reading :)